Four trains, two boats and a bus in Switzerland…

A couple of weeks ago, a friend and I took ourselves on a trip to the island of Ufenau, near the south end of Lake Zürich. Early-morning haze was hanging in the air as I stood waiting for the train at our local station, which isn’t much bigger than a bus stop. Lake Constance is behind those trees and bushes, but it was one of those mornings when you couldn’t see Germany on the other side.

Fifteen minutes down the line I arrived at Rorschach, and took the lift from the lakeside station up to the main road to meet my friend and take some pics. 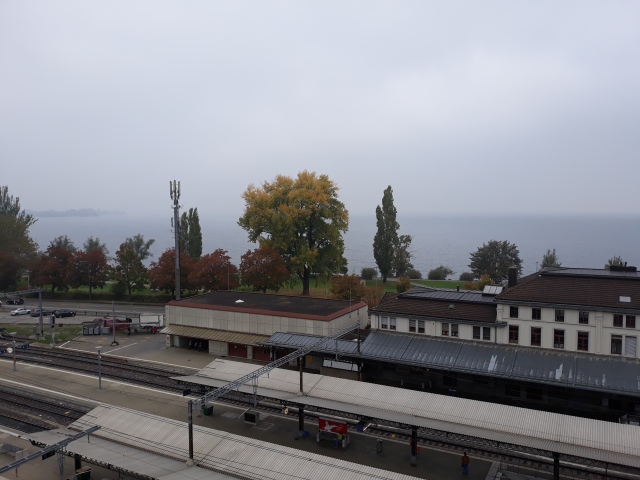 Train number two took us south, up the Rhine Valley to Sargans, and now the sun had come out. The peak there is Gonzen, a baby at 1830m high. 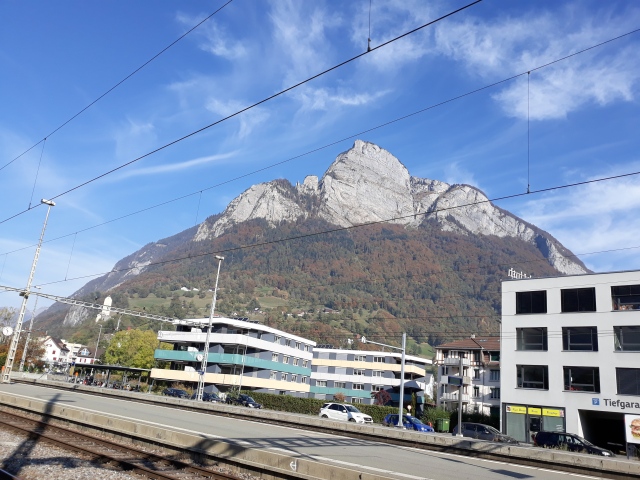 Sunshine accompanied us on train three, heading west now along the banks of the Walensee. You can tell by the photos below that train three had nice clean windows. 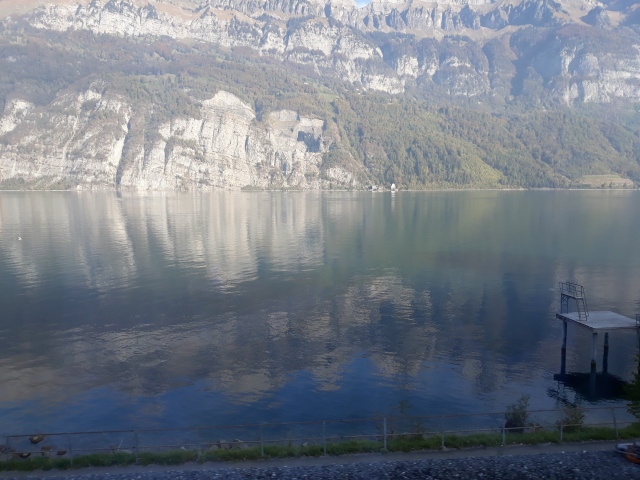 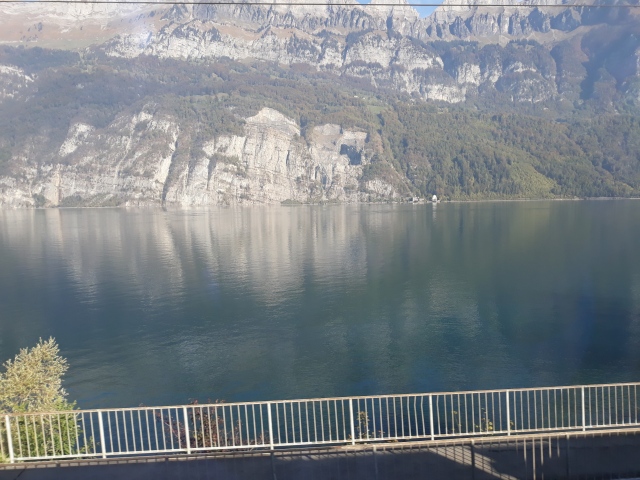 An hour after leaving leaving Sargans, we arrived at Wädenswil on Lake Zürich. Memories of a previous trip when we had to make several mad dashes to catch trains and buses were uppermost in our minds now, and we immediately went to find out where – and when – the boat to Ufenau was. The autumn haze was down again, but at least the boat was coming…

Ufenau is a tiny island – we walked round it in less than half an hour. After lunch, of course. We had Knusperli – small chunks of fried fish, usually perch, with sauce to dip them in, and salad and no, I didn’t take a photo…
Pleasantly full, we set off on foot round Ufenau. The photos below show the little church and chapel from opposite ends of the island, which gives you an idea of its size. 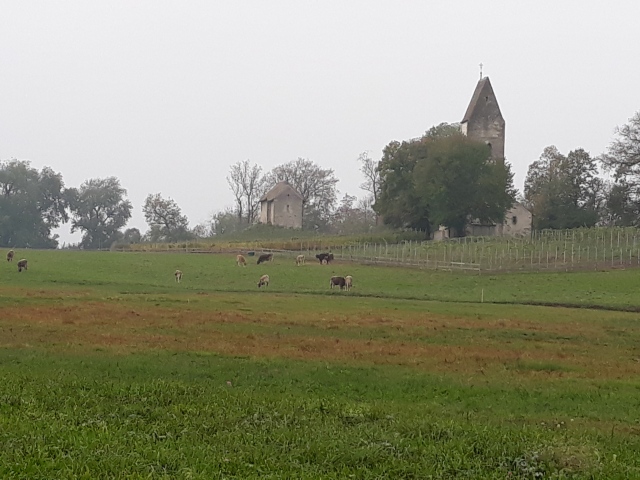 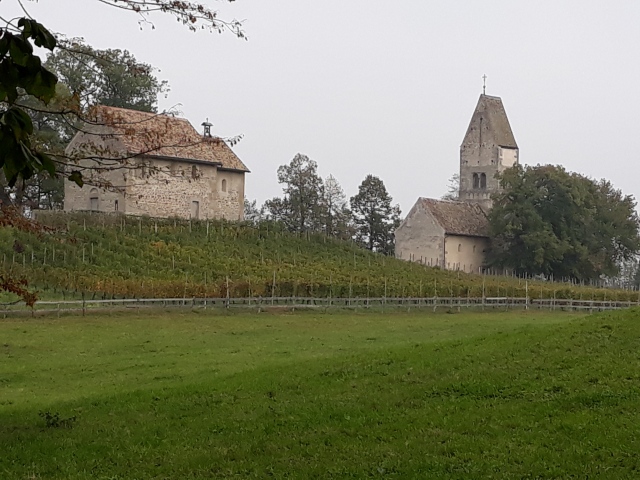 And then it was time for the next boat, to the Au peninsula, further north on the western bank of Lake Zürich.

The sun was stuggling through again as we arrived there, and first of all we walked round the park, which boasts a castle, a cave, and a little lake with a lovely wood and iron bridge. 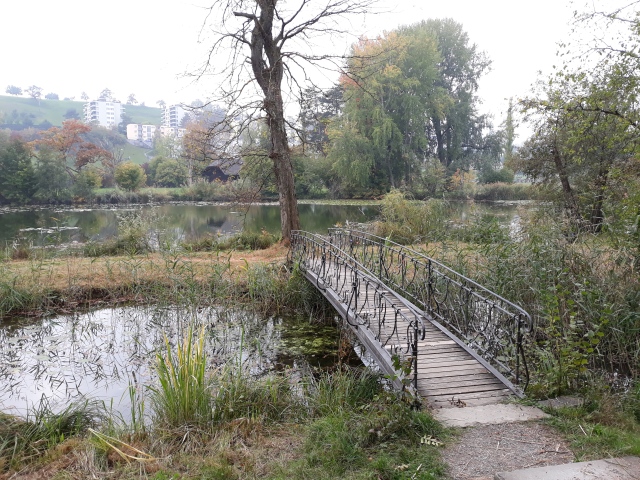 Our hike continued along the banks of Lake Zürich and back to Wädenswil, where the fourth and final train of our trip – the Voralpen Express –  was waiting to take us to St Gallen, and the bus back home. Full circle! 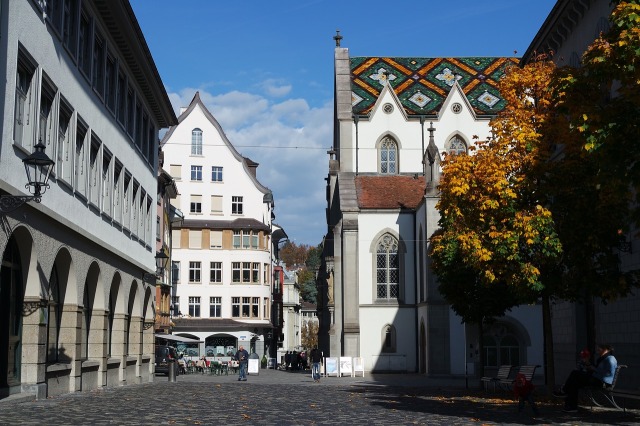 This entry was posted in Life in Switzerland, travel and tagged Arbon, Rorschach, travel. Switzerland, Ufenau, Walensee. Bookmark the permalink.