A couple of years ago, I met writer Sandra Danby on Twitter (where else…), and I’m very pleased to welcome her to the blog today to talk about her recently-published novel, Connectedness.
The book is described as a tale of art, adoption, romance and loss moving between now and the Eighties, from London’s art world to the bleak isolated cliffs of East Yorkshire and the hot orange blossom streets of Málaga, Spain.
This is the first time we’ve had photos of Spain on the blog, so over to Sandra:

Locations
When I decided to use the city of Málaga in Spain as one of the key settings in my latest novel Connectedness, it was a pragmatic choice based on two things: proximity to our home in the countryside near Ronda, and Málaga is the birthplace of Pablo Picasso. Connectedness begins with the story of art student Justine Tree who spends a year at art college in Málaga where she falls in love. It was important to show the joy of her love affair, the sense of freedom and strangeness of living abroad, and the possibilities that open up when you are in an unknown place. I’ve selected five locations to explain what I mean. 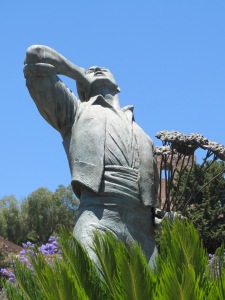 1 – Paseo del Parque, el biznagero
Justine meets and falls in love with Federico, an architecture student. He becomes her guide to the city, Spanish life and food. Their regular meeting point is a statue in the Paseo del Parque, a green boulevard which runs between the Old Town and the port. El Jazminero, the statue of a jasmine-seller, has since been re-located and re-named El Biznagero. But I retained the original name for my novel. I like his lovelorn posture, flowers clasped in his hand.

2 – Paseo del Parque, el cenachero
The statue of El Cenachero, the fish-seller, was originally located in the Paseo del Parque near the jasmine-seller. When I was editing the manuscript, I revisited Málaga to check facts and was horrified to find that both statues had disappeared. With dismay I walked back and forth through the park until at the Tourist Information office I was told of their new locations. The experience was distressing and I used it in my novel: when Justine finally revisits Málaga for the first time in twenty seven years, she too cannot find El Jazminero. To her, he is a long lost friend.

3 – Plaza de la Merced, busy traffic
The influence of Picasso runs throughout the story in two ways. As a child, Justine is encouraged to draw birds by her father who tells her the story of how Pablo, also a child, finished a drawing of a dove abandoned by his father. As a young artist, Justine learns from Picasso’s approach to art; he makes collages, he draws, paints, makes ceramics and sculpts. Picasso also gave me a key location in the story. As a student sharing an apartment in Málaga, Justine lives on the square where Picasso was born. I sat at a café in the Plaza de la Merced and watched life go by, and selected an apartment which I decided was Justine’s.

4 – Malaga cathedral
On our first visit to the city, my husband and I sat in a tourist café next to the cathedral and listened to a gipsy playing guitar. It seemed natural that Justine and Federico should meet in this same cafe on the Plaza del Obispo. Natural also that when Justine is desperate to earn money and decides to sell her paintings, she should set up her stall with the other artists lined up beside the cathedral. 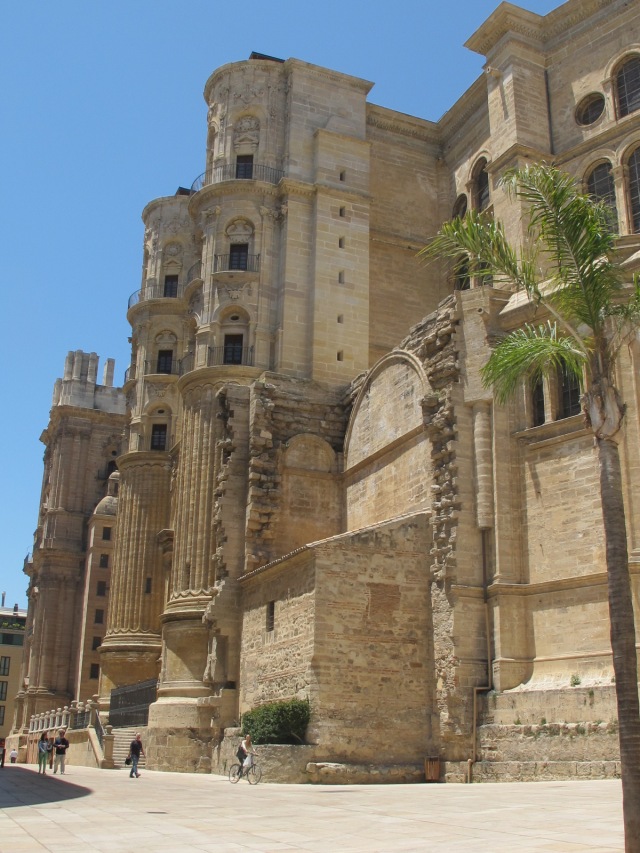 5 – El Palo, the seafront
As Justine’s life in Málaga becomes more troubled, she is taken for lunch to El Palo, a fishing village to the east of the city. This is a delightful old-fashioned place where the Spanish go on holiday, away from the expensive designer beaches and bars of the main city. Children run barefoot along the pavements and the black sand, as the smell of roasting food drifts from the beach barbecues. I chose this setting for Justine’s difficult scene because it appears, at first glance, a happy, sunny place. 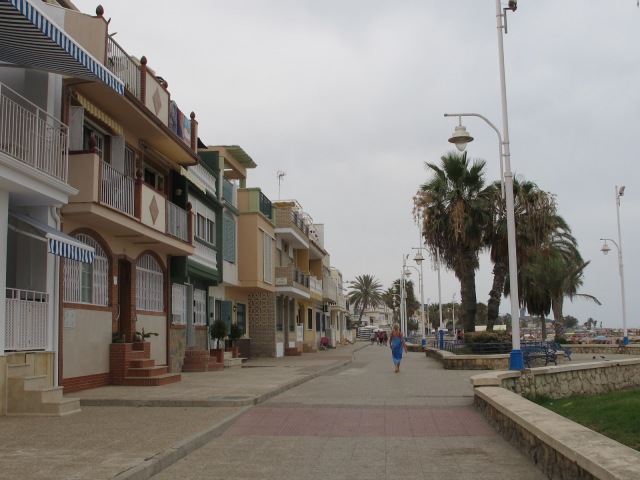 Thank you, Sandra! And here’s the intriguing Connectedness blurb, and some more info about Sandra and her writing:

TO THE OUTSIDE WORLD, ARTIST JUSTINE TREE HAS IT ALL… BUT SHE ALSO HAS A SECRET THAT THREATENS TO DESTROY EVERYTHING

Justine’s art sells around the world, but does anyone truly know her? When her mother dies, she returns to her childhood home in Yorkshire where she decides to confront her past. She asks journalist Rose Haldane to find the baby she gave away when she was an art student, but only when Rose starts to ask difficult questions does Justine truly understand what she must face.

Is Justine strong enough to admit the secrets and lies of her past? To speak aloud the deeds she has hidden for 27 years, the real inspiration for her work that sells for millions of pounds. Could the truth trash her artistic reputation? Does Justine care more about her daughter, or her art? And what will she do if her daughter hates her?

This tale of art, adoption, romance and loss moves between now and the Eighties, from London’s art world to the bleak isolated cliffs of East Yorkshire and the hot orange blossom streets of Málaga, Spain. 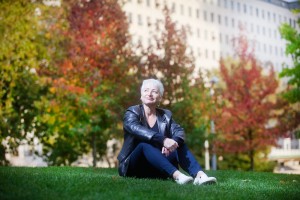 Sandra Danby is a proud Yorkshire woman, tennis nut and tea drinker. She believes a walk on the beach will cure most ills. Unlike Rose Haldane, the identity detective in her two novels, Ignoring Gravity and Connectedness, Sandra is not adopted.

About the ‘Identity Detective’ series
Rose Haldane reunites the people lost through adoption. The stories you don’t see on television shows. The difficult cases. The people who cannot be found, who are thought lost forever. Each book in the ‘Identity Detective’ series considers the viewpoint of one person trapped in this horrible dilemma. In the first book of the series, Ignoring Gravity, it is Rose’s experience we follow as an adult discovering she was adopted as a baby. Connectedness is the story of a birth mother and her longing to see her baby again. Sweet Joy, the third novel, will tell the story of a baby abandoned during The Blitz.

An extract from ‘Connectedness’

Spain, November 1982
It was lunchtime. El Paseo del Parque, the walkway through the linear park which reached alongside the port to the foot of the tenth century castle of Gibralfaro, was lined with tall palms offering welcome shelter from the sun. A heavy perfume hung in the November air, with not a breath of a breeze to stir the leaves. They were sitting on a bench beside El Jazminero, the sculpture of the jasmine-seller, eating bread and olives, chewing, licking oil off their fingers, and unable to take their eyes off each other, unable to stop smiling.

When I’m old, I want to remember this.

Federico held an olive to her lips and, feeling she was in a DH Lawrence novel, she opened her mouth and let him pop the olive inside. They now ate lunch together every college day, sitting on a bench, their thighs lightly side by side in delighted recognition of their growing mutual attraction. Federico’s coyness was attractive, a refreshing change for Justine from the Yorkshire boys who after a week would be pressing her to indulge in a bout of hip-grinding. She liked the old-fashioned flirting. It was sensual, the first time she truly understood its meaning.

They had sort of fallen into food roles. Justine provided the bread, bought from the panadería opposite her flat, a different shaped loaf every day. Pan pueblo, a long oval big enough to feed a hungry family. Pan Andaluz, smaller, with a diamond design on top. Justine’s favourite so far was the creamy Mollete, flat oval bread rolls from Antequera in the hills north of Málaga, often eaten for breakfast; toasted and sprinkled with olive oil, chopped tomatoes and salt. Every day Federico arrived with a tasty accompaniment to go with the pan. Yesterday, slices of jamón so thin they were almost transparent, the wine-coloured ham marbled with white swirls of fat. Before that it was salted almonds and triangles of hard cheese the colour of Indian Yellow, drizzled with oil. Today, a jar of home-cured olives.

This entry was posted in Guest Posts and tagged Connectedness, Sandra Danby, Spain. Bookmark the permalink.

4 Responses to Sandra Danby and Connectedness…