A couple of weeks ago I opened a book I’d bought a while ago, and immediately I was transported – to exotic countries I’ve only dreamed of visiting. Couple that with one of the best suspense stories I’ve ever read, and you get an edge-of-the-seat experience: Kai wakes up in a foreign hospital, but she has lost her memory. Who is she, and what is the danger lurking in her past?

The book is Forgotten, by Heleyne Hammersley, and I’m delighted to welcome her to the blog today to talk about her trip, and how the novel grew from it.

In December 2001 I sat next to a pool in Phitsanulok in Thailand and wrote the first chapter of what was to become my first published novel, Forgotten.  The journal sections of the novel are based on part of a year-long trip I took with my partner in 2001-2002.

I wanted to write about our travels but not in some sort of travelogue style, so I turned to fiction.  We’d already journeyed through China, Vietnam, Laos and parts of Thailand, and I’d left each country with memories that I wanted to include in my story.

Beijing was an obvious starting point for the ‘journal’ element of the novel.  It is a fascinating city with a complex history. It’s also very crowded and the air is often thick with pollution.  I wanted my main character to see the city as I had, as a first-time traveller to Asia.  Some of the descriptions that I included are of places that I found very striking, especially the view of Tiananmen Square and the interior of the Forbidden City. 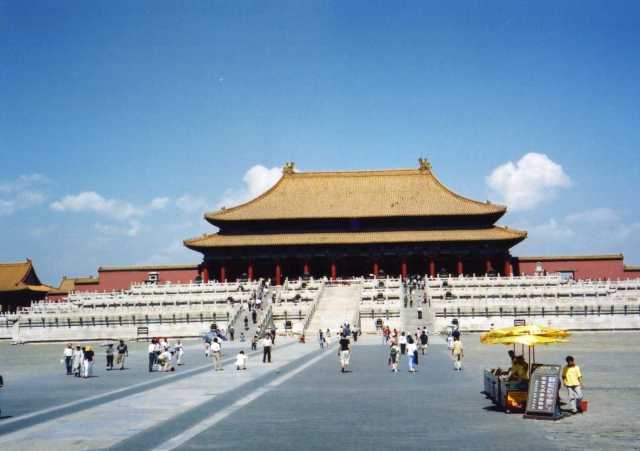 Inside the Forbidden City – Beijing

I included more rural parts of China for contrast and to enable me to develop Kai’s character in a different environment.  Xiahe in particular was a place which left a lasting impression with its mix of Tibetan Buddhism and burgeoning Chinese capitalism.  I wanted to depict the disparity between the impoverished monasteries and the flashy shops which seemed to sum up much about Chinese culture at the time.

From China I took Kai to Vietnam.  I’ve never been much of a city person but I really enjoyed the buzz of Hanoi.  Some of the streets are overhung by ancient trees which seem to give the place a timeless feel.   It’s in Hanoi, among western faces once again, that Kai first starts to feel uneasy and the reader learns more about the life that she has left behind.

Laos was incredible and had to be a location for part of Kai’s journey.  It was the friendliest place on that leg of our trip and a place I’d love to visit again.  The lush landscape seemed to lap right up to the edge of the tiny capital Vientiane which was just as friendly as the countryside and incredibly colourful.  I wanted Kai to experience some peace before the horror of her accident.

The ‘present’ in Forgotten is in Chiang Mai, a city that I didn’t really enjoy.  It was crowded, hot and, despite the wats and temples, felt quite modern.  It’s perhaps that uncomfortable feeling that I try to capture during Kai’s stay there and I was glad to send her back to the mountains around Mae Hong Son, even though I was sending her into danger.

The mountains near Mae Hong Son

The places that Kai visits in Forgotten are as much a part of the story as her experiences.  The locations are like characters, each different, each memorable and, hopefully, each one is interesting to the reader.

Thank you, Heleyne – what an amazing journey!

Heleyne Hammersley was born in South Yorkshire but has lived in Cumbria for the last twenty years where she sometimes teaches English and often walks on the fells.

The idea for her first novel, Forgotten, came about while on an extended holiday in China and South-East Asia in 2001.