A visit from Cass Grafton

I first met Cass on social media, but given that we both live in – roughly speaking – the same area in lovely Switzerland, it wasn’t long before we met up in person. Since then, we’ve been meeting regularly to share the ups and downs of the writing life, and drink the odd prosecco (or two). Cass writes in different genres, but today she’s here to tell us about her new book, The Cottage in a Cornish Cove, an uplifting romance novel.
Over to Cass:

The Cottage in a Cornish Cove
I’ve always enjoyed holidaying in England, and when I started to write novels, I realised this love of the country was influencing how I wrote, with my stories always becoming strong on location.
A love of Cornwall inspired me to write The Cottage in a Cornish Cove. I first visited the county as a young child but it was when I returned as an adult that I truly fell in love. Before we were married, my husband and I had both visited the quaint Cornish fishing village of Polperro, and had fallen in love with it (my husband later proposed to me in a restaurant there). We ended up living in Somerset for seven years, when our children were young, and we went to Polperro several times a year: day trips, long weekends and sometimes for a week or two at a time. We stayed in various B&Bs and on caravan sites, but our absolute favourite thing was to rent a cottage and pretend we lived there.

You can probably see where this is going! The long-held dream that one day we might somehow live in Cornwall faded over time. Our jobs and lifestyle meant it wasn’t practical as the children grew up, but even after we moved north from Somerset, we still came down at least twice a year to feed our souls in this timeless county.
Then came the years we lived in Connecticut, and by the time we returned to the UK, the children were grown up and living at opposite ends of the country, and my husband and I felt the need to find somewhere else to call our home-from-home in Cornwall. Recalling our day trips to Fowey when staying in Polperro all those years ago, we gave it a try and were instantly smitten.
Fowey sits on one side of a wide estuary (the River Fowey), with Polruan—a smaller village—on the wooded hillside opposite. They are charming places, clustering around the water’s edge, with a passenger ferry running between the two and further up river, a small car ferry at Bodinnick (next to Ferryside, once the home of Daphne du Maurier, an author whose Cornwall-set novels are amongst my favourites). 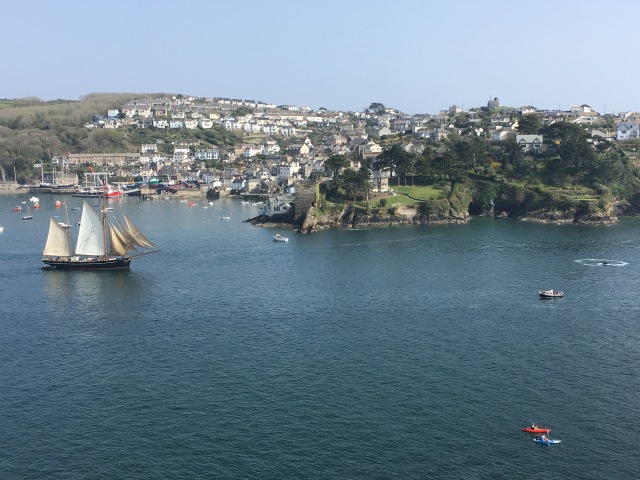 Polruan and the house on the headland

When I sat down to pen a contemporary romance set in Cornwall, these settlements, (with a smidgen of Polperro thrown into the mix), became my inspiration for Polkerran, the fictitious village in the book. I drew a map of my imaginary place, closing off the river to make a sweeping bay (known by the locals as ‘the Cove’) and chose two prominent properties on opposite headlands to feature in the story: the titular cottage, and Harbourwatch, a large gothic-style property occupied by a somewhat grumpy and reclusive writer. 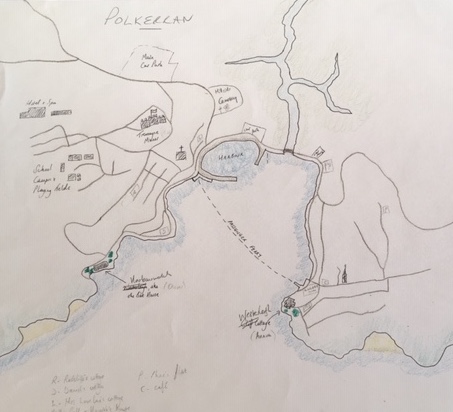 Although we now live in Switzerland, this was a fantastic excuse to take several ‘research’ trips to Fowey, and I spent the time walking, writing and gazing out across the bay at the large property in Polruan I had decided was my cottage in a Cornish cove. The actual house was probably built in the early 20th century, but in the story it becomes a substantial cottage, with old-fashioned features.
Cornwall: county of my heart, and I’m delighted to now be able to call it ‘home’ when I’m with my characters in Polkerran. 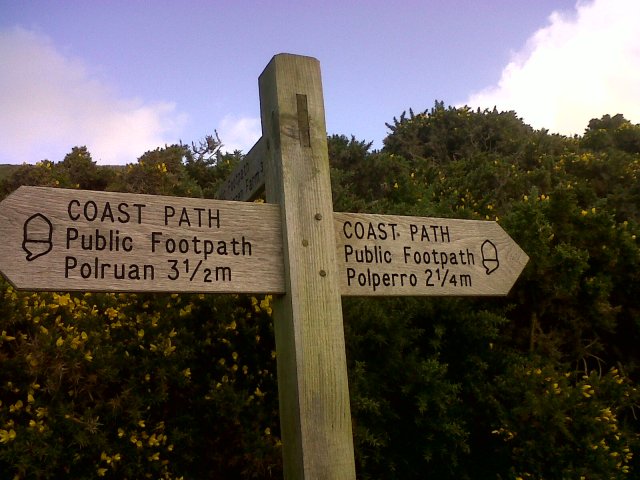 Thank you for visiting, Cass – and for the beautiful photos! The Cottage in a Cornish Cove is a lovely feel-good romance with great characters and a real sense of place.

Orphaned as a baby and raised by uncaring relatives, much of Anna Redding’s happiness as a child came from the long summer holidays spent with an elderly family friend, Aunt Meg, in the coastal village of Polkerran.

With Aunt Meg’s passing, Anna is drawn back to the West Country, relocating to the Cornish cove where she was once so happy. Filled with memories, she hopes to perhaps open a B&B—and perhaps cross paths with Alex Tremayne again, a local boy she used to have a major crush on and who only had to walk past Anna to make her heart flutter.

Settling into her new life, and enjoying her work for the older, reclusive and—to be honest—often exasperating Oliver Seymour, Anna is delighted when Alex reappears in Polkerran and sweeps her off her feet.

The stars finally seem to be aligned, but just as Anna thinks all she’s ever wished for is within reach, a shock discovery brings everything under threat, and she discovers she’s living a dream that isn’t hers.

Can Anna rescue the new life she has made for herself and, when the testing moment comes, will anyone be there to hold her hand?

A Cottage in a Cornish Cove is available from Amazon UK, Amazon US, Kobo, Barnes & Noble Nook, Smashwords, and the Apple iBookStore.

An avid bookworm since childhood, Cass Grafton writes the sort of stories she loves to read – heart-warming, character driven and strong on location. Having moved around extensively and lived in three countries, she finds places inspiring and the setting of her novels often becomes as much a part of the story as her characters.

She leans heavily towards the upbeat and insists on a happy ever after. As one of her favourite authors, Jane Austen, once wrote, ‘let other pens dwell on guilt and misery’.

The cove in The Cottage in a Cornish Cove

This entry was posted in Guest Posts, travel and tagged Cass Grafton, Cornwall, romance, Switzerland, The Cottage in a Cornish Cove, Writing. Bookmark the permalink.