The Wolf of Dalriada 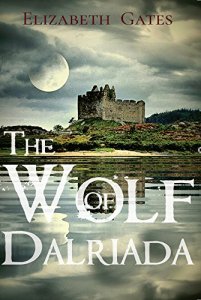 A few weeks ago I met Elizabeth Gates on Facebook, and when I heard that her new book The Wolf of Dalriada was set in my old home country, Scotland, I had a closer look. Isn’t it a lovely cover? Here’s Lizzie to tell us more about it:

Forty years ago, when the rain stopped but the mist did not lift, I heard shepherds calling in Gaelic to their dogs. On the hills of mid-Argyll, Scotland, the sound was entrancing but that was also one of those moments when something – you may not know what – is born. For me, that was the moment when The Wolf of Dalriada stories were born and they have followed me on and off though all my life ever since.

But life, like novels, needs a ‘What if? Moment’  too. And that moment, for The Wolf of Dalriada stories, came a few years (decades) after the Argyllshire Gathering. I was in a library and quite by chance I came across Caroline Weber’s wonderful book, Queen of Fashion: What Marie Antoinette wore to the Revolution (2007). I wondered then, ‘What if a young seamstress from the court of Versailles was imprisoned in the Hills of Argyll? Given the Scottish ability to keep secrets, who would know about her? Who would hold her captive and for what surely evil purpose? And who would rescue her? And what would this hero achieve by doing so? Would he be free to enjoy the company of a beautiful and vulnerable woman? Or would he have other claims on his sword arm? And what would the French seamstress’s captor have to say about it all?

And so the story of the noble-born seamstress Adelaide de Fontenoy and the Laird, Malcolm Craig Lowrie, began to grow until it became a tale of obsessive and ruthless cruelty set against the break up of society’s norms. The whole of Europe was a maelstrom of ideas at the time (1793, the year of Marie Antoinette’s death). And in the Highlands of Scotland, the old ways were giving way to a more sophisticated and venal approach to land management – the Clearances.

Against this backdrop and fighting to survive are members of the Highland Clans or French families – aristos and others – swept into the maw of Madame La Guillotine. Survival is by no means certain. So then . . . who can save people who want only to live and love in the stark landscape of the Highlands and Islands or make their way in one of the most lovely cities in Europe? Who can ride the storm? Only, it seems, the young Laird, the Wolf of Dalriada . . .

But The Wolf of Dalriada stories also pose a question closer to home. How, in difficult and dangerous times, do you live from day to day? After all, even if you are in the throes of Revolution, you still need lunch. And this story provides a few ideas.

The first novel, The Wolf of Dalriada, is published and available through Amazon.co.uk and Troubador as an e-book or a personally-signed print book (in UK only) through my own website. In February 2020 – appropriate for Valentine’s Day – the second novel, Staining the Soul, will be launched. (Watch this space!) And I am currently writing the third in the series.

I started my writing career at the age of four when I discovered that no-one was writing the stories I wanted to read. My writing career continued and I was rather surprised when I grew up to find that not everyone wanted to write. But since then, I have worked throughout Europe and the United Kingdom, earning my living by teaching or writing or teaching writing. Because I love history, I love the research for world-building that goes with it. Because I love travel, I am at home in cities and wild spaces, in the UK and abroad. And because I love family, friends and labradors, I am always more than ready to ask the questions ‘Why?’ and ‘What if?’ This is why I’m a novelist.

This entry was posted in Guest Posts, Scotland and tagged Elizabeth Gates, Scotland, The Wolf of Dalriada. Bookmark the permalink.

2 Responses to The Wolf of Dalriada