The hottest day of the year…

Posted on September 1, 2019 by lindahuber

I like hot weather. But 35°C and more is – whisper it – almost too much of a good thing. So a friend and I decided to spend a day up the Flumserberg, in the east of Switzerland. It’s only 60 miles from here so not too much travelling time involved to get there, and at over 2000m we might even see some snow. It would be cooler than down in the valleys – wouldn’t it? After all, it’s a ski area in winter…

So off we set, first in a lovely air-conditioned train and then in an equally air-conditioned Postbus. Up in the chairlift, and we arrived at the start of the Alpenflora Trail, which we intended to hike along. The views down over the Walensee en route were spectacular.

We arrived at the start of the trail and realised – it was still pretty hot up here. We were walking uphill, too. And there wasn’t much shade… But the Alpenflora was interesting.

Part of the way crossed with a Geology Trail that I’ve earmarked for another (cooler) day. I’m not sure what this is, but it made us laugh.

On we went, heat shimmering all around. We did see snow, in patches.

Ta-da! We were at the highest point. 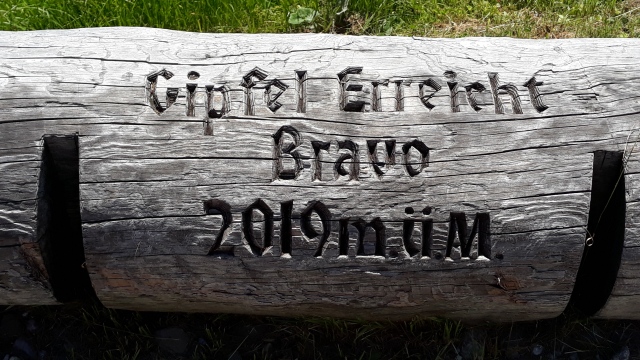 Lunch, and a shady terrace, had never been so welcome.

Afterwards, we sat there, looking at the next chunk of Alpenflora Trail wind round the side of the Flumserberg… in full afternoon sun, a few brave souls inching their way along it in the distance… and we went for the little train down to base camp again. The train was a replacement for a chairlift under revision, and I can honestly say it was the shoogliest ride ever. The driver came into each carriage in turn before we started off and told us that ON NO ACCOUNT were we to stand up until we arrived back down. (And nobody did.)

A boat trip on the Walensee seemed like a good way to end the day. The heat was still smothering, but we had a breeze off the water. It was sensational.

What I learned that day: you’d need to go up a much higher mountain to escape the heat. My city-soul had a thought as we caught the train back home – a shopping centre would have been a whole lot cooler. But then, think of those views…

7 Responses to The hottest day of the year…

Leave a Reply to A Life in Books Cancel reply