From Dark to Light with Jennie Ensor

I’m really pleased to welcome Jennie Ensor back to the blog today. Last time, she told us about her second novel, psychological drama The Girl in his Eyes, and today she’s talking about writing in two genres – her latest book, Not Having It All, is the epitome of something completely different… over to Jennie:

Writing ‘a brazen comedy about the perils of midlife’– the subtitle of my latest book, Not Having It All – was, as you might imagine, hugely different from writing either a psychological mystery (my first novel, Blind Side) or a dark psychological family drama (my second, The Girl In His Eyes).

Not Having It All and The Girl In His Eyes have some elements in common, though. In The Girl In His Eyes, a secret child abuser grooms a 12-year-old girl, the daughter of his wife’s close friend. Some characters in Not Having It All also fight the urge to act on socially unacceptable impulses like committing acts of violence. My latest novel also deals with darker aspects of the psyche, such as obsessive jealousy, coveting another woman’s child and fraud against one’s employer. The two also share (I hope!) strong elements of suspense and family drama, but are totally different in tone.

Whereas the writing and rewriting of The Girl In His Eyes was often difficult, with Not Having It All I had great fun with the structure and plot, and didn’t worry about the story diverging from my outline. The novel is unusual in that it’s composed of emails, letters and journal entries, and told from multiple first-person viewpoints. (Maria Semple’s Where D’You Go Bernadette? has a similar structure.)

What I loved most of all though, was letting my characters speak and act as they wanted, however unreasonably.

Kurt Hudson, the intolerant chief executive of Computer Corp ruminates over whether his wife Bea might be up to no good with her best friend, Maddie. Bea, a phobia researcher, has to cope with her chauvinistic boss ‘the Prof’ and the bad behaviour of her juice/stone-throwing 4-year-old daughter, Fran. Katie, the Hudsons’ childminder who tries her best to cope with Fran and the disobedient family dog Big Ears, secretly drinks Bea’s supply of Triple Sec and writes in her journal that ‘Mr H needs his arse grabbed more often’. Maddie, an unconventional ‘found object artist’ who adores Fran and is desperate to have a child, confides about her opinions about Bea’s childrearing to rather wooden, old-fashioned therapist Mr Rowley. (‘I’d give anything to have her child – a child like hers, I mean’.) Colin, a divorced, about-to-be-axed senior insurance manager at ‘the Nation’s No. 1 Pussy Insurer’ schemes to entice Maddie into his arms while he secretly reimburses 13 unjustly treated customers from company funds.

I also had fun with characters’ names, nicknames and monikers – from Mellow Marty and Sweaty Mike to insurance claimants Mrs Hurtpuss and Mrs Violet Scratched-by-cat-Got-infection-Eyesight-nearly-gone Black. (I smiled to see the list of character names in the novel compiled by my editor, who hinted that I should cut some.)

Image by Gordon Johnson from Pixabay

Then there are the farcical, veering towards off-the-wall situations in the novel. While writing about Bea’s experiments at her university, I invented a robotic spider (Grommet) that runs up people’s legs, and a part of the brain (the BOLF). The creative part of my own brain clearly went into overdrive!

It’s certainly been much more enjoyable to talk about this book than it was my last one. It really was a pleasure to write a comedy after working on such a dark, disturbing novel as TGIHE. By then I definitely needed a good laugh! Black comedy is one of my favourite types of humour – I love having a good chuckle at something totally inappropriate.

As far as post-writing things go, switching genres can be tricky. It is probably easier in some ways to have just one set of readers than two sets, even if there is some overlap. It took a while to come up with a new tagline for my website banner: ‘From dark psychological fiction to daring comedy’, and it’s still not right. On the other hand, it’s definitely more satisfying I think to write what one feels like writing with the hope that one will somehow find new readers.

I’ve started to plan and research my next novel. Although the setting is dark and gritty, I’ll do my best to find a way to incorporate some humour into it!

Thank you, Jennie! And having laughed my way through Not Having It All, I can thoroughly recommend it! Find out more about Jennie Ensor and her books below:

A Londoner with Irish heritage, Jennie Ensor began her writing career as a journalist, winning two student awards and covering topics from forced marriages to mining accidents. She’s tackled controversial issues in her novels, too – terrorism, gangsters and war crimes in her debut Blind Side (Unbound, 2016); child abuse and sexual exploitation in her second novel THE GIRL IN HIS EYES, a psychological family drama (Bloodhound Books, 2018).

Her third novel, NOT HAVING IT ALL: a brazen comedy about the perils of midlife, is published by Bombshell Books on 28th May 2019. It’s a laugh-out-loud family-life comedy about a woman torn between the demands of her family and her science career.

Jennie Ensor’s poetry has appeared in many publications, e.g. Ink Sweat and Tears. In her spare time, she sings in a choir and dreams of setting off on a long trip with her Kindle. 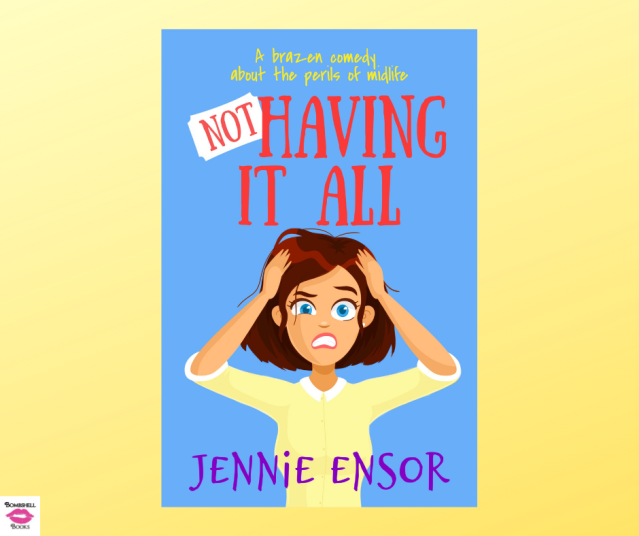 This entry was posted in books, Guest Posts and tagged humour, Jennie Ensor, new release, Not Having It All, psychological drama, The Girl in His Eyes. Bookmark the permalink.

5 Responses to From Dark to Light with Jennie Ensor