Return to the Little French Guesthouse…

Huge congratulations to Helen Pollard! Today sees the launch of her new book, Return to the Little French Guesthouse. It sounds amazing – I’m sure a couple of weeks in a lovely French guesthouse would do us all good. I’m delighted to welcome Helen back to my blog today, to tell us a little about where we might find ‘her’ guesthouse! Over to Helen: 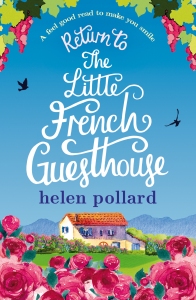 I’ve often said in interviews that I wouldn’t dare write about a place I’d never visited! Nowadays you can research on the internet, study online photos, even get virtual reality tours of places, and I do that – but I’m not brave enough to rely on that alone. I like to write about places I’ve actually been to, so I know I’m giving an accurate picture.

Having said that, of course, the advantage of fiction writing is that you can have fictitious places. 🙂 For The Little French Guesthouse and its sequel Return to The Little French Guesthouse, I availed myself of the best of both worlds. Emmy visits real towns and places in the Loire region – Chinon, Saumur, the château at Chenonceau, for example – and the countryside described in the book is all based on past experience and current research . . .

but La Cour des Roses is an imaginary guesthouse, very loosely based on a gîte where we stayed a few years ago, and the nearby town, Pierre-la-Fontaine, is also imaginary.

Although it is based on a real town we often visited, and I studied photos we took and used Google maps to remind myself about various aspects of it, I wanted the freedom of not worrying about what was positioned where, how many restaurants there were in the town, whether there was a fountain or not. I enjoyed building my own town in my head without having to answer to the facts, even though the atmosphere and general sense of the place is still very close to what we experienced.

For the sequel, I had to invent yet another small town – not because of the detail this time, but because I was writing about a jazz festival and I couldn’t find a ‘real’ one that takes place near enough to the region where the book is set or at quite the right time of year. And so Saint-Martin was born – a generic name and the perfect imaginary host for my imaginary festival.

Blue skies, new love, and a glass of Bordeaux . . . what could possibly go wrong?

When Emmy Jamieson leaves her life behind and moves to La Cour des Roses, a gorgeous guesthouse amidst vineyards in France, everything is resting on her success as the new guesthouse manager.

Looming in the calendar is the biggest booking ever, when the entire eccentric, demanding Thomson family will descend for a golden wedding anniversary. With airbeds on the floor and caravans in the garden, La Cour des Roses will be bursting at the seams.

Emmy knows she’s up to the challenge, especially with the support of the gorgeous Alain, the half-French, half-English, caramel-eyed accountant. But she hadn’t counted on a naked, sleepwalking travel blogger, or the return of owner Rupert’s venomous ex-wife Gloria.

Gloria has a few things to say about Emmy’s new role, Rupert’s finances, and the unsuspecting Alain, which send everybody reeling. Just when Emmy can see a future for herself of endless sunshine, true love and laughter, are her dreams about to be ripped at the seams?

Fans of Jenny Colgan, Lucy Diamond and Nick Alexander will want to join Emmy for a glass of wine as the sun sets on the terrace at La Cour des Roses.

As a child, Helen had a vivid imagination fuelled by her love of reading, so she started to create her own stories in a notebook.

She still prefers fictional worlds to real life, believes characterisation is the key to a successful book, and enjoys infusing her writing with humour and heart.

Helen is a member of the Romantic Novelists’ Association.

2 Responses to Return to the Little French Guesthouse…