It’s a murky autumn day here in N.E. Switzerland – the leaves are falling and we can see Lake Constance from the flat again. (That’s it around the middle of the photo.) Ours is the second largest lake in the country, vaguely fish-shaped, with Germany along the northern bank, Switzerland to the south, and Austria in the east. The Rhine flows into the lake where the fish’s mouth would be, and out again in the west, from the tail fin. And just a few kilometres further is the largest waterfall in Europe – the Rhine Falls.

It’s less than an hour’s drive from here and I’ve been there several times. It’s spectacular. The falls are 150 metres wide and 23 metres high, and in late spring/early summer, when the snow is melting and coming down from the mountains, an average 600,000 litres of water go over the edge every second. That’s a lot of water. 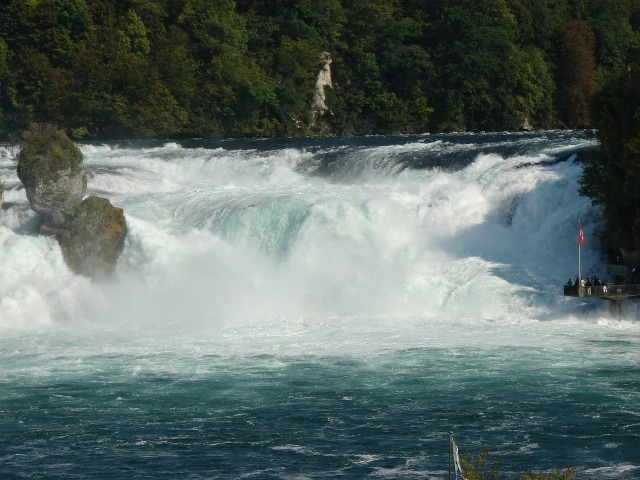 You can view the falls from platforms and from the banks of the river.

Or, if you’re feeling brave, you can go on a boat trip – they go right up close. I’ve only done that once – it was a dampening experience but fortunately it was a very hot day…

You can visit the rock in the middle of the falls and go up to the viewing platform there – again, not for the faint-hearted. I’m not sure I’d do that a second time, but it was definitely worth the climb!

And all around is the sound of water – a huge amount of water – crashing over the rocks. No photo can do justice to that.

I didn’t visit the falls this year, but they say we’re in for a hard winter. If there’s a lot of snow, I’ll go next summer. The largest recorded amount of water was in 1965, when – wait for it – 1,250,000 litres per second went over the falls. That’s almost unimaginable.

To finish off, two pieces of book news: The Attic Room has been awarded a second Kindle Select All-Star Bonus, and The Paradise Trees will be available in large print in November. My copies should arrive any day now and I can’t wait to hold them!

20 Responses to Switzerland… The Rhine Falls