This week, from the 14th-18th July, we’re celebrating authors. The idea is we all blog about some aspect of writing, and then everyone can hop along to as many blogs as he/she likes to see what everyone else is writing about. AND – there’s a giveaway – a lucky winner will be sent a brand new copy of The Cold Cold Sea!

But first of all I’m going to answer a question I’ve been asked many times in the past year – How did you come to start writing?

Rewind quite a long time… I was seven years old and my mother was washing my hair in the kitchen. (She always did this in the kitchen, presumably to avoid having to stoop over the low basin in the bathroom) So there I was, a facecloth pressed over my eyes to keep the shampoo out, and suddenly Mum said, ‘Linda, would you like to be a Brownie?’ 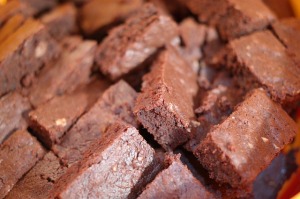 (Very quickly for our international friends – the picture on the right shows American-style brownies. My mother did not want me to become a piece of chocolate cake. British Brownies are younger versions of Girl Guides and can be seen here.)

Back then in the kitchen, I thought about this for a moment and decided that Brownies were a bit scary, so I said, ‘No.’
My mother, however, had been an enthusiastic Cub Scout leader in her younger days…
So I joined the Brownies, and one of the first things I did after enrolling was  – my writer’s badge. I had to write a story (I wrote about a girl called Susan who lived on a farm), a letter, and there might have been something else too, I can’t remember. What I do remember is the fun I had writing about Susan on the farm.

To cut a long story short, I never stopped writing. Little stories for children became longer stories for children which became whole books for children – I wrote four, only one of them still survives. In my teens I wrote truly terrible poetry like everyone else, and fortunately none of that has survived. Then came the short stories for adults, and the novels…
It was enough just writing them. To be able to hold my books in my hands is an absolute dream come true and I can never say thank you enough to everyone who has made this possible. 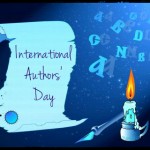 This post is part of a blog hop by b00kr3vi3ws.in/

(18.07.14 Due to an unprecedented spam attack (nothing nasty, just boring) this week, all comments have been disabled in the meantime. Anyone wishing to get in touch can use the email button above, or Facebook or Twitter. Normal service will be resumed as….)

This entry was posted in The Writing Life and tagged #IAD. Bookmark the permalink.