It was a real Victor Meldrew moment. The first of two, actually. There I was in Switzerland a couple of months ago, rooted to the spot in our nearest big-town washing machine retailer, eyes popping and mouth hanging open… 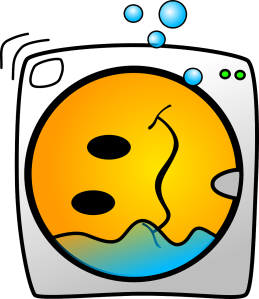 But let’s start at the beginning. Washing machines, as we all know, don’t last forever and mine had died. I did my research on the www and found a nice machine, but in spite of over 20 years in Switzerland I’m a canny Scot at heart, so instead of ordering online I went to see my chosen machine in the flesh, so to speak.

The machine I’d picked out cost 1,100 Swiss francs. That’s at the expensive end of the cheap machines, by Swiss standards. Now I’m the first to admit that numbers aren’t my thing – they always seem a bit meaningless. I was hopeless at maths at school. So big prices can be difficult to manage, but this one didn’t look too bad.

And it was as well I did go to the shop, because ‘my’ machine looked like someone’s four-year-old had assembled it with glue and sticky-backed plastic. A charming young salesman saw my dilemma and led me to another machine. This was the updated version of the one I’d had since last century, so I was happy to negotiate. The catalogue price for this machine was Fr.2,200, and in the end I was getting it for Fr.1,500. (A mid-range Swiss price)

So far, so good. I was happy with my new choice and coping quite well with the numbers when the young salesman ruined my day completely.

‘Come and look at this!’ he trilled, pulling me across to the other side of the shop. I stood in front of another shiny white machine. It was a bit like the one I’d just agreed to buy, actually. In fact, it was very like the one I was buying… Not to put too fine a point on it, it was identical. The only difference was the company name. Oh, and the price. This one was Fr.2,700.

‘Yes, it’s exactly the same!’ the salesman assured me happily. ‘The two companies are affiliated, and some people do buy into the name. So you’re getting a bargain, aren’t you?!’

That was my Victor Meldrew moment number one. Sorry – but what possible justification is there for a price difference on that scale?? My Fr.1,500 (and presumably the shop is still making a healthy profit here) is only a bit more than HALF the price of EXACTLY the same machine with a different company name on the front? That’s a potential to save Fr.1,200 with every machine – think what good could be done with all that money. There are people starving right here in Europe as well as in the wider world, and other people are setting crazy prices and making enormous profits – where is the justice here, where is the compassion? I was and am gobsmacked.

The second Victor Meldrew moment? That came when I was in the UK for the launch of The Paradise Trees. I was wandering round a department store one afternoon and spotted washing machines in the far corner. A kind of masochistic fascination took over… across the store I went, and there was the machine I’d bought, the Fr.2,200 one for which I had paid Fr.1,500 and which was identical to the Fr.2,700 one.

Like I said at the start, numbers are meaningless. Give me a book any day.

This entry was posted in Life in Switzerland, Scotland, travel and tagged The Paradise Trees, Victor Meldrew, washing machine. Bookmark the permalink.